Hint:  this question is to first enumerate the range of an edge (abscissa), and then enumerate the sorted points, according to the current enumerated points The ordinate of the point with the largest ordinate before gets the length of this side, and then compare and update the answer.

Question 1:
Once upon a time there was a greedy King who ordered his 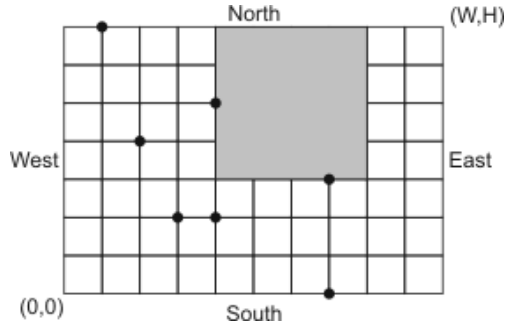 chief Architect to build a field for royal cricket inside his park. The King was so greedy, that he would not listen to his Architect’s proposals to build a field right in the park center with pleasant patterns of trees specially planted around and beautiful walks inside tree alleys for spectators. Instead, he ordered neither to cut nor to plant even a single tree in his park, but demanded to build the largest possible cricket field for his pleasure. If the Kind finds that the Architect has dared to touch even a single tree in his park or designed a smaller field that it was possible, then the Architect will loose his head. Moreover, he demanded his Architect to introduce at once a plan of the field with its exact location and size.

Your task is to help poor Architect to save his head, by writing a program that will find the maximum possible size of the cricket field and its location inside the park to satisfy King’s requirements.

For this task, you may neglect the diameter of the trees. Trees cannot be inside the cricket field, but may be situated on its side. The cricket field may also touch park’s border, but shall not lie outside the park.

Input
The input begins with a single positive integer on a line by itself indicating the number of the cases following, each of them as described below. This line is followed by a blank line, and there is also a blank line between two consecutive inputs.

Next N lines describe coordinates of trees in the park. Each line contains two integer numbers Xi and Yi separated by a space (0 ≤ Xi ≤ W, 0 ≤ Yi ≤ H) that represent coordinates of i-th tree. All trees are located at different coordinates.

Output
For each test case, the output must follow the description below. The outputs of two consecutive cases will be separated by a blank line.

Write to the output file a single line with three integer numbers P, Q, and L separated by spaces, where (P, Q) are coordinates of the cricket field Southwestern corner, and L is a length of its sides. If there are multiple possible field locations with a maximum size, then output any one.

Note: This is a sample input and output that corresponds to the park plan that is shown on the picture.