Question 1: (If you have finished this question, please try Question 2)
Below is an 8 × 8 chessboard on which we will designate square locations using the ordered pairs as indicated. For example, notice that piece A is at position (2, 2) and piece B is at position (4, 3). 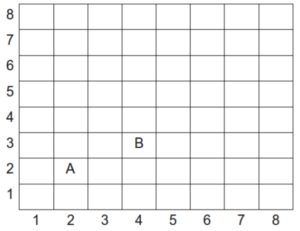 A knight is a special game piece that can leap over other pieces, moving in the “L” pattern. Specifically, in the diagram below, K represents the knight’s starting position and the numbers 1 through 8 represent possible places the knight may move to. 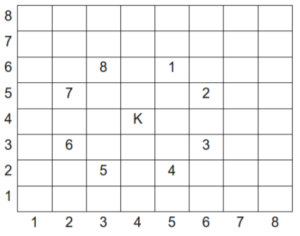 Your program will read the starting location of the knight and output the smallest number of jumps or moves needed to arrive at a location specified in the second input.

Output Specification
Your program should output the minimum (non-negative integer) number of moves required to move the knight from the starting position to the final position. Note that the knight is not allowed to move off the board during the sequence of moves.

Output Specification
Output yes if it is possible to escape from the room. Otherwise, output no.

Notes
1. The online grader begins by testing submissions using the sample input. All other tests are skipped if the sample test is not passed. If you are only attempting the first three subtasks (the first 7 marks), then you might want to handle the specific values of the sample input as a special case.

2. For the final subtask (worth 2 marks), if you are using Java, then Scanner will probably take too long to read in the large amount of data. A much faster alternative is BufferedReader.