Question 1:
A common problem in mathematics is to determine which quadrant a given point lies in. There are four quadrants, numbered from 1 to 4, as shown in the diagram below: 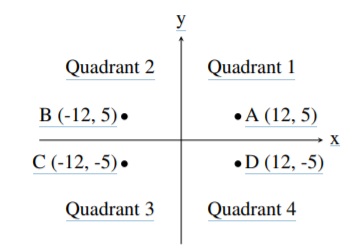 For example, the point A, which is at coordinates (12, 5) lies in quadrant 1 since both its x and y values are positive, and point B lies in quadrant 2 since its x value is negative and its y value is positive.

Your job is to take a point and determine the quadrant it is in. You can assume that neither of the two coordinates will be 0.

Question 2:
Your new cellphone plan charges you for every character you send from your phone. Since you tend to send sequences of symbols in your messages, you have come up with the following compression technique: for each symbol, write down the number of times it appears consecutively, followed by the symbol itself. This compression technique is called run-length encoding.

More formally, a block is a substring of identical symbols that is as long as possible. A block will be represented in compressed form as the length of the block followed by the symbol in that block. The encoding of a string is the representation of each block in the string in the order in which they
appear in the string.

Given a sequence of characters, write a program to encode them in this format.

Input Specification
The first line of input contains the number N, which is the number of lines that follow. The next
N lines will contain at least one and at most 80 characters, none of which are spaces.